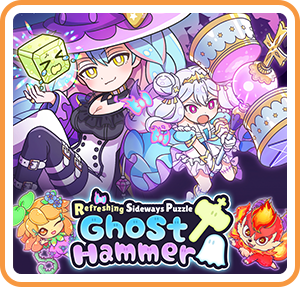 Let's challenge the mission with finding out the movements of Blocks falling sideways and down!

◆"Story Mode": Challenge the mission and you can read the story.

Missions occur at each stage, including the type of blocks to be broken, the use of special hammers and so on!

Clear all the disturbances from Witch and release the story!

You can check the released ghosts in "Ghosts Index".

◆"Endless Mode": You can play the puzzle until you lose.

Endless Mode is an unlimited stage until the game is over!

The difficulty level is increasing as the game progresses! Join Blocks with Hammer to the MAX level!

Princess Aurora heads to Demonus Forest where Witch Serrata is to save ghosts.

What is the purpose of Witch and the secret of Kingdom, that is revealed in the battle?

※The voices of this game include only Japanese version.